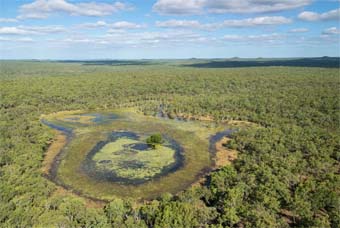 The Australian Conservation Foundation (ACF) has welcomed the historic return of lands to the Olkola people of Cape York Peninsula and the declaration of Australia’s newest protected area – the 269,830 hectare Aboriginal owned Olkola National Park.

The new national park is part of a 737,320 hectare package of former pastoral properties acquired by the Queensland Government, with support from the Federal Government.

Welcoming the handover, ACF Northern Australia Project Officer Andrew Picone stated "ACF congratulates the Olkola people on this historic day that sees the return of their homelands and thanks them for the creation of Australia’s newest national park.

“The return of land to the Olkola is the best way to protect this area’s natural and cultural heritage and turn around the extinction crisis facing northern Australia.

“With adequate funding from State and Federal governments, the Olkola will be well placed to restore the landscape and expand their own land management enterprises, delivering strong social, economic, cultural and environmental outcomes.

“The Olkola have already established a carbon abatement project and are considering their country’s tourism potential.

“ACF commends the Queensland Government for its commitment to returning land to Traditional Owners on Cape York and we welcome the great social, cultural, economic and environmental opportunities this process brings.

“We look forward to the State Government’s continued support for Indigenous land management and the return of Aboriginal homelands across Cape York.”

More than a million hectares has been returned as Aboriginal freehold for economic purposes.

The Cape York Land Council, Balkanu Development Corporation and the Queensland Government have been invaluable in delivering these positive outcomes.