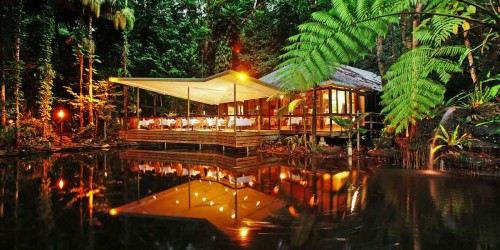 Seven locations within Queensland's national parks are to be opened up for new resort developments.

Queensland Premier Anna Bligh has announced that the Queensland Government would seek expressions of interest from investors to establish low-impact eco-tourism lodgings in or near national parks.

Accommodation may include semi-permanent structures, such as safari camp-style tent sites, eco-lodges or huts.

Premier Bligh explained "these are some of our most beautiful locations but for those unwilling or unable to pitch their own tent, these locations have simply been off limits.

"(This) announcement will open these unique destinations up, potentially to whole new markets to complement the existing camping facilities and offer new visitors greater choice."

Premier Bligh said the plan would put Queensland's best assets on show in the growing eco-tourism sector and the success of projects would be monitored before other sites were considered.

The Queensland Premier said Tasmania, Western Australia and New Zealand were considerably miles ahead in their nature offerings, adding "these are the kind of tourism opportunities our state is currently missing out on and that is something our government wants to rectify."

Accommodation would be built by private companies, but the land would remain government-owned, with returns going to national parks and conservation.

The National Parks Association of Queensland (NPAQ) has criticized allowing tourism infrastructure to be built in national parks, NPAQ spokesman Paul Donatiu saying "if we break this conservation principle we're potentially opening the door to large-scale development in national parks.

"They may tread lightly, but again I still believe that this is potentially the thin edge of the wedge ... parks are public places and not for commercial gain."

Image: An eco-tourism lodge in the Daintree in Far North Queensland.