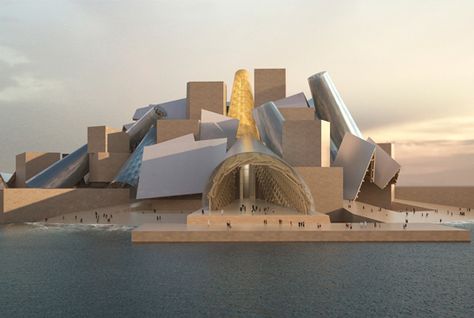 While Abu Dhabi’s Louvre satellite museum is set for imminent handover to the Emirate’s Tourism and Culture Authority, a senior official of the Abu Dhabi Tourism Development and Investment Company (TDIC) has insisted the Guggenheim Abu Dhabi is not on hold.

Louvre Abu Dhabi, which has been delayed for five years, is now expected to open before the end of the year.

TDIC Chief Executive Sufian Hasan Al Marzooqi recently told Arabian Business “the Louvre is ready and we are handing it over to (the) Abu Dhabi Tourism and Culture Authority (TCA) this year.”

When asked about the Guggenheim, Al Marzooqi said the project was "not on hold", declining to give further details.

It has recently emerged that contractors for the ambitious satellite of the New York-based Guggenheim have been asked to renew their tender bid bonds.

On conditions of anonymity, a senior executive of one of the bidding companies told Arabian Business “the commercial bid was submitted long time ago. It was verified and discussed, but there was no outcome from the client.

“However, they asked us to renew the bid bond three weeks ago and we have renewed our bid bond.

“The tender bid bond has been renewed three times,” admitting that he wasn’t aware of when the contract will be awarded.

In February 2016, architecture and design magazine Dezeen, quoted Guggenheim architect Frank Gehry as saying the work has not started on the museum and no construction contract been yet awarded for the US$680 million museum.

Although the TDIC website does not give any value or opening date for the project, it said Guggenheim Abu Dhabi is a transnational museum dedicated to contemporary art and culture and is being developed in collaboration with The Solomon R. Guggenheim Foundation.

The museum will have 13,000 metre² of gallery space, 18,000 metre² of exhibition space and a 350-seat theatre, a library, a research centre and food and beverage, and retail outlets.

To keep the project in the public eye in Abu Dhabi, Do Art, Do It Now!, an interactive evening of performances drawing on poetry, music and theatre, will today (18th May) engage audiences on with the themes explored in the current Guggenheim Abu Dhabi exhibition at Manarat al Saadiyat, 'The Creative Act: Performance, Process, Presence'.

The evening will bring together artists, curators, friends, and audience members to participate in playful, interactive, and unpredictable experiences inspired by the installation 'Another Happy Day (2016–17)' by Ramin Haerizadeh, Rokni Haerizadeh and Hesam Rahmanian, which was commissioned for The Creative Act.

"The events throughout the evening are designed to foster creativity, allow visitors to view and explore various mediums and discover different avenues of creativity to engage with, and provide them with invaluable and unpredictable experiences in visual art, theatre, fashion, poetry and music. We encourage everyone who is visiting to take part and truly explore the themes of performance, process and presence."