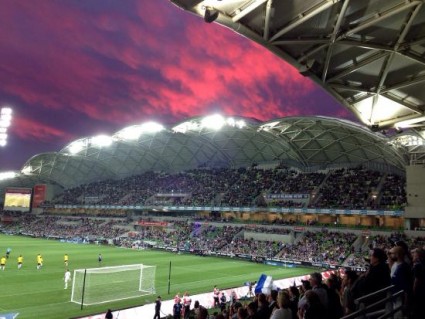 Cox Architecture have acknowledged the success of AAMI Park Stadium in receiving the 'World's Most Iconic and Culturally Significant Stadium' Award at the Stadium World Congress 2012 in Doha, Qatar this week.

Cox Architecture and Arup were the architects and engineers for the development of this ground breaking stadium that has become a symbol of Melbourne's sporting prowess.

A "delighted" Patrick Ness, Design Director of Cox Architecture explained "we are honoured to have designed this world breaking stadium that not only was recognised in Victoria as the recipient of the Victorian Architecture Medal in 2011 but has now been recognised internationally as an exemplar stadium."

AAMI Park completed in 2010 is the latest in the sporting icons of Melbourne. The 31,000 seat venue has become a landmark for all sporting fans in Melbourne and has become home to the Melbourne Storm, Melbourne Heart and the Melbourne Victory. The unique design has become the latest world stadium icon showing how these buildings can be culturally significant places to the communities they serve.

The awards were presented on the evening of Monday 4th June 2012, during the World Stadium Congress. The Congress is being held from 3rd to 7th June at the Sheraton Doha Resort & Convention Centre, Qatar.

The event, which grew from the Stadium and Venue Design and Development Qatar conferences, brings together industry experts to assist in the design and development of world-class stadiums.

Hosted in Qatar, the World Stadium Congress program has been addressed by influential members of host countries, government and local organising committees with regional and international experts from across the stadium industry.

For more information go to www.worldstadiumcongress.com