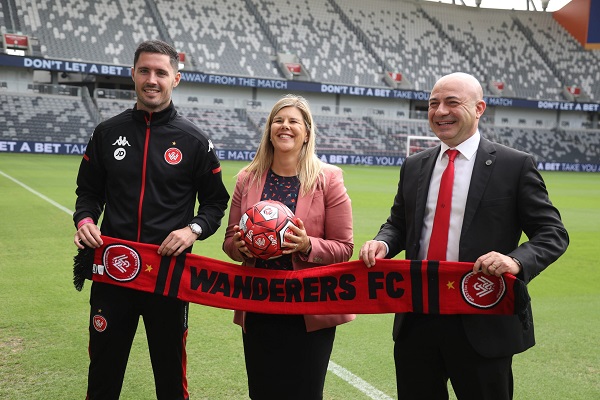 The Western Sydney Wanderers have announced a one-year partnership with the NSW Office of Responsible Gambling in an effort to raise awareness of gambling issues.

As part of the deal, the A-League club will not accept any sports betting sponsorships or promotional agreements, and the  Wanderers will work to educate staff, players, and their fans about the risks associated with gambling.

Wright advised "attending a live sports event is a real ritual for many people in NSW, and we’re excited that different codes and teams are supporting their fans to ‘Reclaim the Game’ and turning down gambling advertising and sponsorship.

“It’s fantastic to have the Wanderers on board alongside Cricket NSW and we look forward to more announcements in the future.

“We think you should be able to enjoy sport without betting.

“That’s why we’re working with sports codes and teams to Reclaim the Game and get back to what sport is meant to be about.

“The Wanderers have shown great leadership as the first A-League club to join the Reclaim the Game initiative, and they are to be congratulated on their commitment to bringing sport to their fans, minus the betting promotion.”

Explaining that the club has a strong focus on supporting its community, and this partnership is aligned with that focus, Wanderers Chief Executive, John Tsatsimas added “the Western Sydney Wanderers are fortunate to have some of the most passionate, engaged fans of all clubs.

“We value those communities who have been such strong supporters, and one of the ways we aim to give back is by choosing partnerships that encourage community wellbeing.

“We know that gambling is an issue that concerns many in our Western Sydney community, and we’re really excited to have this opportunity to raise awareness of gambling harm and reduce the amount of betting promotion that our fans are exposed to.”

The NSW Office of Responsible Gambling said it is in further discussions with other sporting codes and clubs with hopes of announcing more similar partnerships throughout 2021.