A Day in Pompeii - Australia’s most popular museum exhibition 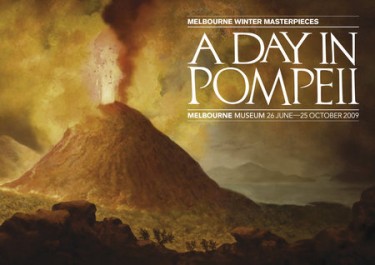 The most popular museum exhibition ever seen in Australia, A Day in Pompeii, has ended at the Melbourne Museum.

Since opened on 25th June, one in 10 Victorians, some 325,000 people, have visited the collection of artefacts and audio-visual displays from the ancient Roman city. The figure exceeded the museum's projected audience by 60%.

Melbourne Museum Chief Executive Dr Patrick Greene told The Australian newspaper, "I'm delighted to be wrong ... we've never had an exhibition beyond 170,000 before."

Sydney's Powerhouse Museum, by comparison, said the 2003 Star Wars exhibition was the most popular it ever staged, attracting 230,000 visitors.

The National Gallery of Victoria earlier this month reported 330,000 visitors to its Salvador Dali Liquid Desire exhibition, which like Pompeii was badged as a Melbourne Winter Masterpiece and given marketing support by the Victorian Major Events Co and Tourism Victoria.

The Victorian Government will not disclose how much these exhibitions cost to mount or what the gross box office figures are on the grounds they are commercial-in-confidence, a spokesman for Arts Minister Lynne Kosky stating "we don't release the cost and conditions of securing these major cultural events as it would provide rival cities with an unfair advantage."

However, unlike some previous Winter Masterpieces exhibitions, which were imported from foreign museums and galleries, both the Dali and Pompeii shows were unique to Melbourne, a credit to the local curators who worked for many years developing them.

Dr Greene added "an exhibition like this cost a number of millions to put on."

Melbourne Museum has also managed to offset its costs by selling the exhibition to Wellington's Te Papa museum, after which Pompeii will most likely be staged in Singapore.