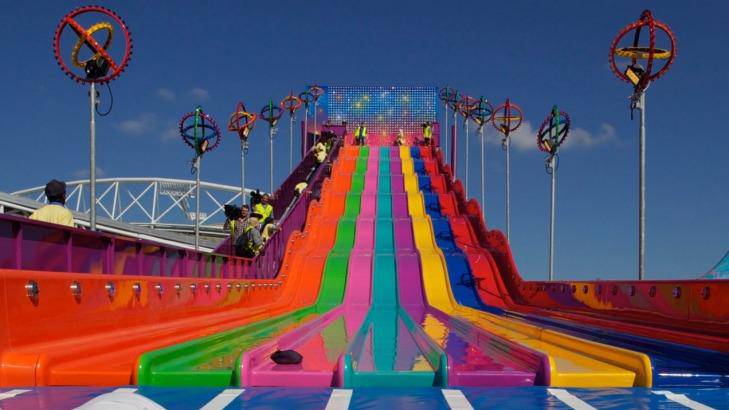 The Royal Agricultural Society of NSW (RAS) has revealed that close to 900,000 people attended the 2010 Sydney Royal Easter Show.

“We added a new element to our Show program in 2010 – Excellence in Agriculture Day – which was a resounding success. The day gave city families a deeper insight into Australian agriculture and an opportunity to celebrate the hard work of our primary producers in putting food on our tables and clothes on our backs

“In 2010, families saved $357,500 and valuable Show time by visiting eastershow.com and purchasing and printing their tickets at home.”

Agriculture
• The Show was home to the largest District Exhibit display in the world, with over 50,000 pieces of fresh fruit and vegetables arranged in the displays;
• The Dairy Farmers Farmyard Animal Nursery gave 450,000 young Showgoers the chance to interact with 1,000 baby animals;
• Crowds watched as almost 4,000 champion animals strutted their stuff in the four Grand Parades held over the 14 days of the Show;
• More than 10,000 aspiring farmers got hands on milking cows in the Dairy Farmers Milking Barn.

Entertainment and Showbags
• Woodchopping athletes chopped through 2,600 blocks of dense wood over the course of the Show;
• In the Supercoat Dog Spectacular, 40,000 hurdles were jumped by 180 energetic pooches;
• The Toyota V6 HiLux Heroes completed 1,568 laps of the Main Arena including 280 laps in reverse and 42 laps on two wheels;
• Robosaurus’ car-nivorous appetite saw him crash, smash and burn 84 cars

Carnival
• The Coca-Cola Carnival hosted more than 100 rides and games which included $7 million worth of new rides, making it the most valuable Carnival the Show has ever seen;
• Standing 46 metres high, the SkyView Wheel made 6,000 rotations giving 41,000 Showgoers a birds eye view of Sydney;
• Thrill seekers attended the Carnival in droves where 20,000 extreme riders pushed it to the limit on the brand new XXXL;
• Guest purchased 1.6 million Showbags with Diva being the clear favourite for 2010. Following closely behind was Dora the Explorer, Coca Cola, Buzz Lightyear and the Socceroos Showbag.

Food
• Showgoers ate their way through all the Show classics including: 140,000 Dagwood Dogs, 42,000 Coon cheese toasties, 30,000 Cheese on a Stick, 21,000 bags of fairy floss – washed down with 40,000 cups of traditional lemonade;
• On a healthier note, Showgoers gobbled up 35,000 corn cobs, while 11 tonnes of fruit salad was sold by our District Exhibits;
• More than 34,000 scones were made and sold with tender love and care by our favourite ladies from the Country Women’s Association;
• The Australian Women’s Weekly Kitchen presented 182 live cooking demonstrations to 25,000 food aficionados and distributed 200kg of meat and 500kg of vegetables as free food samples.

During the Show, Peter King wrote in the Sydney Morning Herald about the significance of the event.

Suggesting that since the 2000 Olympic Games, “Sydney has found it difficult to fall in love with another big event,” King explained that “the show contributes more than $500 million to NSW in terms of employment, tourism, agricultural development, infrastructure and transport.”

King also suggested that Sydney needs “to build more iconic events that are authentically Australian (and that) we need to galvanise Sydney's business and events community and rebuild the strength and confidence we once had and start staging, embracing and supporting more events that are truly Australian.”

The future of Australia’s Royal Shows will be a feature in the May/June 2010 issue of Australasian Leisure Management.