5,500 crowd bring the Pan Pacific Masters Games to a close 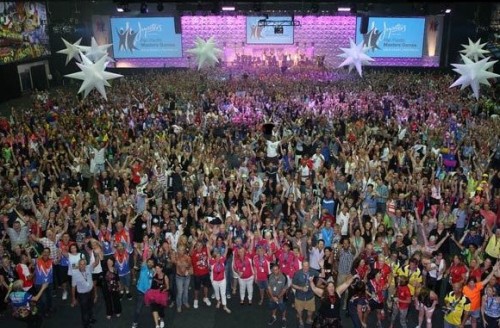 Across the Gold Coast today the final events were run and won, while last night’s official closing ceremony at the Gold Coast Convention and Exhibition Centre was voted as ‘pure gold’ by the more than 5,500-strong audience.

Events Management Queensland Chairman Kerry Watson stated “the camaraderie on display at this closing ceremony and on the sporting fields is what makes the games truly special.

“There are 13,000 very happy people on the Gold Coast enjoying their sport, their live music and most of all their reconnection with old teammates and the forming of new friendships.”

Watson confirmed that the 10th version of the biennial Jupiters Pan Pacific Masters Games had been an outstanding success, adding “the numbers are amazing, (we have seen 10  fabulous days, a record 43 sports, 13,239 participants, 90,000 visitor nights.

“To have Olympic gold medalists in the same room as those who never played higher than D grade, all dancing and celebrating together to the strains of some icons of Australian music is one of the many wonderful aspects of these games.”

Saturday night’s celebration was the highlight of a weeklong entertainment extravaganza for masters games participants at Jupiters Gold Coast and the Gold Coast Convention and Exhibition Centre.

Also in attendance last night were event ambassadors Geoff Masters, Glynis Nunn-Cearns and Pat Carroll who were both participating and spectating at the 40 venues during the event.

Watson also paid tribute to the army of volunteers who are the cornerstone of the Jupiters Pan Pacific Masters Games, concluding “there are more than 1000 volunteers involved and they do an incredible job with what is a massive undertaking.

“These volunteers and our very hard-working staff have cemented this event as undoubtedly one of the world’s biggest and best masters games.”