A nostalgic look back over previous decades gives an insight into the changing composition of Australia’s international visitors.

Wykes comments “Australia’s tourism industry is growing three times as fast as the rest of the economy, driven by record levels of international visitors choosing Australia as their holiday destination.

“This is highlighted by figures released last week which showed Australia had welcomed more than eight million international visitors for the first time ever - an increase of 11% over the previous year.”

This milestone was achieved just 18 months after visitor numbers exceeded seven million annually. This is substantially faster than the ascent from six to seven million visitors, which took almost two and a half years.

Wykes continues “much of the growth in international visitors has come from emerging countries in Asia such as China and the recovery of the Japanese and South Korean markets, driven by increasing household income and a growing middle class.”

This is in contrast to past decades where the majority of tourist arrivals came from traditional markets such as the United Kingdom, the United States, New Zealand, Japan, Canada and Europe. 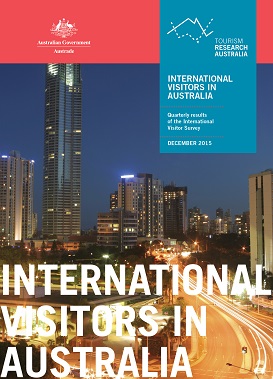 Moving on 50 years, it’s a completely different picture with current statistics showing the importance of the Asian markets, particularly China.

China is now the second largest source of international visitors, after New Zealand, with over one million visitors for 2015/16.

Wykes adds “traditional markets such as the United States, United Kingdom and New Zealand all grew for the 12 months to July 2016, however, the Asia region is the fastest growing region.”

Other factors such as changes to the aviation industry, including increased capacity, have also contributed to the growth of the industry.

These results reflect Australia’s attractiveness as a tourist destination, underpinned by the country’s appeal as a safe, transparent and stable investment environment.

Wykes said the need for evidence-based planning is more important than ever before, as Australia vies for its share of the increasing global tourism dollar.

This information also provides the basis for industry measurement and support for policy formulation, business planning, investment and marketing – essential if we are to keep Australia’s tourism industry growing and thriving.

For more information go to www.tra.gov.au