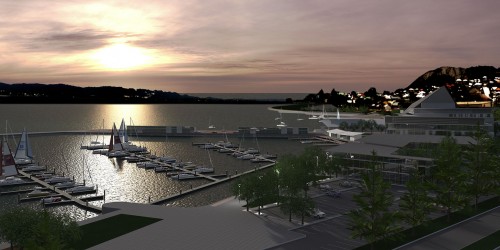 A 30-year vision has been realised today with the Western Australian Government opening the $42 million waterfront development at Albany.

Minister Grylls explained "the development of The Waterfront has been achieved with input from the City of Albany, the Albany Port Authority and the Great Southern Development Commission along with a community reference group and the communities of Albany and the wider Great Southern.

"This collaboration has produced a world-class result with the waterfront development now having the capacity to cater for commercial, retail and tourist investment, including restaurants, cafes, shops, a hotel and short-stay accommodation.

"Combined with the new $70 million Albany Entertainment Centre and the adjoining ANZAC Peace Park, this area provides an exciting and vibrant location for locals and visitors."

The practical completion of the development was marked at the opening with the handover of ownership of the new marina to the Department of Transport and the management of the waterfront's public open spaces to the City of Albany.

Western Australian Transport Minister Troy Buswell said the department was now the main point of contact for boat owners seeking to secure a mooring at the 74-berth marina, adding "these state-of-the-art facilities and pens provide a protected, safe anchorage for the boating community and a base for Albany's important tourist boat operators.

"There is capacity for a further 56 pens to be added as demand increases.

The first commercial lots at The Waterfront were released to the market today with LandCorp offering the 4,338 metre2 Lot 1 and 1,856 metre2 Lot 6 to potential investors through an 'Offer to Purchase' process.

The Waterfront at Albany facts:

• LandCorp is the developer of The Waterfront at Albany working with the City of Albany, the Great Southern Development Commission, the Department of Transport, the Albany Port Authority and a range of stakeholders
• Project area: 17.44 hectares
• Princess Royal Drive was doubled in width along 740 metres to ensure uninterrupted 24/7 access to the port
• The development is divided into an entertainment precinct, an accommodation precinct, a commercial precinct, a town jetty precinct and a harbour precinct
• Total building area will comprise approximately 34,000 metre2 while about 12,000 metre2 is devoted to public spaces
• The $2.8million pedestrian bridge is nine metres high, clears the rail line by 7.5 metres and has a removable section to cope with exceptionally high-wide loads access to the port
• The $70millon Albany Entertainment Centre seats up to 620 and was built for the State Government on land developed by LandCorp
• The $4.54million ANZAC Peace Park was built by the City of Albany on reserve land immediately west of the waterfront project.

Further details of The Waterfront at Albany and land sales information can be obtained at www.albanywaterfront.com.au