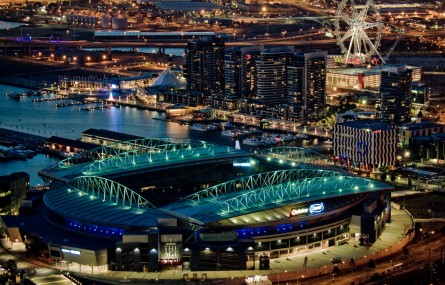 40 fans were ejected from Melbourne's Etihad Stadium, while three people received treatment for minor injuries, after a crowd disturbances during a darts tournament on Saturday evening (10th January).

Trouble flared among fans, many of whom were in fancy dress, during the final of the Invitational Darts Challenge tournament.

Fans began brawling and throwing chairs during a match between the world No1, Michael van Gerwen and the home favourite, Simon Whitlock. Police were called to intervene and, along with the Stadium’s security, restored stability among the crowd when a scheduled break in play was brought forward.

Etihad Stadium Chief Executive Paul Sergeant said the venue hosted two nights of excellent entertainment but conceded “unfortunately some loutish and inappropriate behaviour from just a very small group impacted on the entertainment for the majority of the thousands of fans who attended the events over two nights.”

Sergeant added that the senseless behaviour of the mindless minority was deplorable and their wanton acts of destruction an absolute disgrace, stating “these people are not welcome at Etihad Stadium.

“The pictures and video that went out on social media possibly dramatise and make the situation look worse that it really was.

“At the end of the day a number of plastic chairs were thrown, some tables were upturned but it is debatable as to whether there was any violence involved.”

Victoria Police reported that no arrests were made during the incident

Sergeant said a review would occur involving all stakeholders in order to determine why the issues emerged and how they could be prevented in the future.