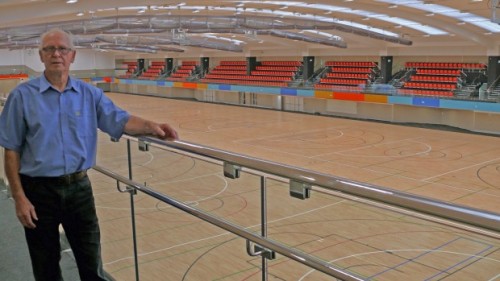 With indoor court space measuring 128 metres x 54 metres and a ceiling height of 15 metres, the $29 million Pulman Arena has opened in South Auckland.

The facility, which has taken five years to build, is the latest addition to the dream of Bruce Pulman, the Papakura philanthropist and founding partner of HEB Contractors which grew to become HEB Construction, one of the leading civil construction companies in New Zealand.

Pulman explained “my dream has been to provide high quality sporting facilities for our communities in Auckland south.

“These facilities also mean that our best athletes don't have to leave their community and their families to go play in other parts of Auckland or the North Shore, a trend that has been ongoing for the years.

“Family and community support is critical for success in both the sporting arena and in life.

"I've been a strong advocate of sport all my life. I believe that the attributes of good sportsmen and women is acquired through perseverance, dedication and commitment to training which leads them to being better equipped for business, life and community people and as role models for our youth."

The realisation of the dream began in 1990 when the then Papakura City Council bought land for a proposed future reserve.

Pulman, whose construction company had developed Massey Park and its facilities in 1989, took up the challenge of both the development and management of this park.

The facility will be put to use during the upcoming World Masters Games.

Image: Bruce Pulman in the arena that bears his name.