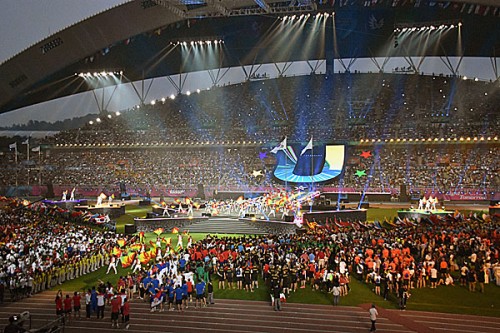 With a bright and vivid Closing Ceremony the 28th Summer Universiade came to an end on Tuesday evening (14th July).

The two-hour event at the Gwangju Universiade Main Stadium connected official ceremonies, including the lowering and hand over of the International University Sports Federation’s flag and the extinguishment of the flame, with cultural performances of from former and future host cities. These elements were put together with the appropriate theme of ‘Sharing the Light’ for the Festival of Nanjang.

The ceremony began with the March Pass of the participating nations who gathered around the star-shaped stage.

The cultural part of the ceremony represented the Korean heritage and embraced the legacy of youth with a series of presentations based around a theme of the passion and ‘light’ of youth.

International University Sports Federation (FISU) President Claude-Louis Gallien held his farewell speech thanking the Organising Committee and the City of Gwangju for their passion and dedicated work, stating “a new star is born tonight, the bright star, the silvery Shepherd's Star, the star of the Gwangju Universiade legend!”

Of these athletes the top three medallists were swimmer Shannon Vreeland (USA) with four gold and one bronze, followed by rhythmic gymnast Yeon Jae Son (Korea) who won three gold and two silver and shooter Haoran Yang (China) who took home three gold, one silver and one bronze.

To make all of this possible, over 40,000 staff and volunteers supported the games.

The Summer and Winter Universiade are international multi-sporting and cultural festivals held every two years, gathering student-athletes aged between 17 and 28 years from over 170 countries.