After more than seven years of planning, 18 months of development and at a cost of $26 million dollars, New Zealand's first inner city lifestyle club has opened its doors to the public tomorrow.

Built on the site of Auckland's ASB Tennis Centre, Next Generation Auckland Domain represents a significant addition to the city's sporting and lifestyle infrastructure.

The club raises the bar for New Zealand health and fitness facilities, with the largest gym floor in New Zealand and fitness equipment that has never been seen here before.

Director of Development, William Guile explains "nothing has been left to chance in this world-class club development. We have over $1million of state-of-the-art gym equipment, some of which is not currently available anywhere else in Australasia, New Zealand's first TapouT Boxing Zone and our 1500 metre2 gym floor is among the biggest in the country.

Guile added "we also have two 25 metre pools, including one on the rooftop, sauna, spa and recovery facilities and an onsite bistro and licensed bar. It's the best of everything, but it's truly a club for everyone and very family friendly." 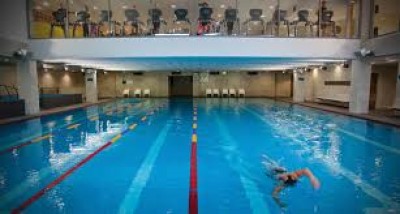 The stunning features continue outside with outdoor terraces, including the rooftop pool deck, adorned with designer furniture overlooking centre court and taking in the city skyline and picturesque Auckland Domain.

This morning (6th September), saw a a traditional dawn ceremony to bless the site, featuring the blessing of a commemorative carving by Maaka Te Moana, an accomplished carver involved in the production of the four teko teko recently made for Eden Park.

The carving was commissioned by the club in recognition of the historic land owners.

Guile adds "we wanted to acknowledge the importance and history of the Stanley Street location as this land formed part of the Auckland Domain gifted to the crown by the Ngati Whatua tribe. To recognise their gift of land we commissioned the carving which will be displayed in the club's foyer and blessed at dawn in keeping with Maori protocol."

The carving stands at 4.8 metre and is made up of seven elements, each representing the different parties with a stake in the development of Next Generation Auckland Domain and the reinvigoration it brings for the local tennis community. Representatives of Aotearoa Maori Tennis and Ngati Whatua will speak during the ceremony, with Maaka Te Moana present to provide an explanation of the symbolism of the carving.

Next Generation Clubs was formed in Australia in 1999 by Scott Lloyd, following the success of his father's David Lloyd Leisure chain in the United Kingdom. The 'next generation' of clubs within the Lloyd family was developed to fill a gap in the market for premium, large scale, family-orientated health, sport and leisure facilities, including pioneering the concept of children's gyms and activity programmes.

The new club is sited at 1 Tennis Centre Lane, Auckland and is offering a variety of memberships.