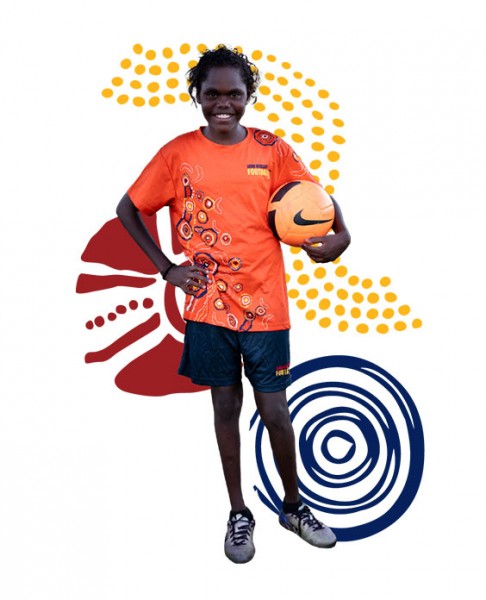 John Moriarty AM, co-Founder and co-Chair of JMF and the first Indigenous footballer selected for Australia notes “Indigenous Football Week is about the power of football to create change for good. It is a chance to bring the football community together to support inclusion, cultural recognition and diversity.

“Women’s and girl’s football is the fastest growing area of Australian football and we are certainly seeing this in JMF.

“JMF is committed to taking a leadership role on gender equality. Currently, 50% of our participants are girls, 40% of our coaches are female, 75% of our board are women, and we are always striving for improvement and creating best practice for gender and social equality in football.”

Events for IFW21 will include community gala days across JMF hubs in NT, Queensland and NSW, a Facebook Live interview series, an expert online panel, an online workshop for young female footballers throughout the country, and special announcements across the week.

IFW21 will feature a lineup of top Australian football experts, identities and IFW21 Ambassadors, including:

Outgoing inaugural FA Women’s Football Council Chair and Co-Chair of JMF, Ros Moriarty adds “over the past months we’ve undertaken a significant gender equality project to build on our own organisation’s best practice when it comes to diversity, equality and inclusion. The entire JMF team has collaborated on this project. We commissioned former Matilda, Olympian and leading sport and innovation strategy expert, Tal Karp, to help us create diversity tools and commitments that will be embedded into business as usual at JMF.”

Based on a three level approach, JMF is implementing:

“Being a female player and coach, I see how differently women in football get treated. I believe it is time we come together as a nation to find better solutions to support women in the game and become leaders and role models for our upcoming generations,” said Stanley.

PFA Co-Chief Executive Kathryn Gill said the PFA remains a proud partner of JMF and Indigenous Football Week and highlights “Indigenous players have made a rich contribution to our sport, from Charlie Perkins to John Moriarty and Karen Menzies. However, there remains much more to be done to better engage and increase access for Indigenous communities to our beautiful game.

“We now have many visible Indigenous role models, from Tate Russell to Lydia Williams and Jada Whyman, and by identifying intersectional barriers and solutions, we will hopefully ensure our game’s structures encourage more stars to emerge from communities into the A-Leagues and National Teams.”

IFW21 partner Football Coaches Australia Chief Executive Glenn Warry says it is imperative that we build a world-class coaching culture within Australia to be more inclusive of all coaches developing and progressing their coaching careers within community and elite football environments.

“Since its inception FCA’s values, policies, strategies and programs have demonstrated that our Association fully supports working with the football community and stakeholders to support inclusion, cultural recognition and diversity. Indigenous coaching role models and ‘heroes’ such as Tanya Oxtoby, provide a career pathway goal for our upcoming JMF women coaching stars of the future,” added Warry.

The A-Leagues celebrates IFW21 with A-Leagues Managing Director, Danny Townsend commenting “Football is the most inclusive sport, with the most diverse fanbase in Australia and we are committed to providing culturally safe and inclusive Leagues for our professional footballers. Representation of Indigenous communities in football is increasing, from grassroots to the A-Leagues, and we fully support programs and activities that increase engagement and access for Aboriginal and Torres Strait Islander peoples.

“We celebrate the Indigenous A-League / women footballers who are emerging as the future stars of our Leagues, including the IFW21 Ambassadors, and we remain committed to creating, supporting and increasing player pathways for First Nations women to the A-Leagues.”