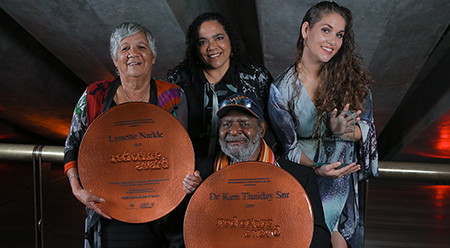 The Australia Council for the Arts has announced the opening of nominations for its two high profile national arts awards programs.

First Nations artists also have the opportunity to be nominated for the highly respected National Indigenous Arts Awards.

Australia Council Chair Rupert Myer said the awards provide an important opportunity to celebrate Australia’s exceptional artistic talent, and to recognise leadership which contributes significantly to the vibrancy and dynamism of our national arts sector.

Myer stated “we recognise the power of the arts to challenge, provoke, and inspire. These awards are a way of acknowledging the role artists play in shaping Australia’s cultural identity.”

Myer said the past recipients are among Australia’s most celebrated artists, adding “these awards honour artists who are central to Australia’s international reputation for excellent artistic practice, fearless experimentation and rich storytelling traditions.”

The Red Ochre Award for lifetime achievement has an extraordinary list of alumni, and for the first time in 2017 two were awarded, recognising Dr Ken Thaiday Senior and Lynette Narkle.

The Dreaming Award for emerging artists (aged 18 to 26 years) has supported impressive young Indigenous artists to create a major body of work through mentoring and partnerships.

The 2017 recipient was Ancestress/Teila Watson.

The National Indigenous Arts Awards are decided by a national panel of Indigenous arts peers.

Nominations for both the Australia Council Awards and the National Indigenous Arts Awards close on 3rd October 2017.

Artists must be nominated by another individual or organisation and cannot self-nominate.

Click here for more information on the 2018 Australia Council Awards.