2015 Cricket World Cup off to a great start 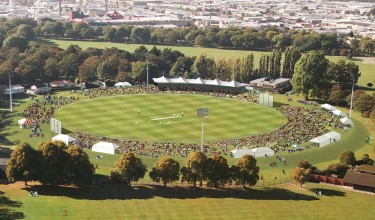 Dr Coleman stated “Christchurch put on an amazing show, creating an event that will be remembered for a very long time.

“With an estimated turnout of 60,000 to 70,000 people, the ceremony emphasised just how much Kiwis love cricket and how we get behind major international sporting events.

“The televised event, which was beamed to more than one billion people internationally, showcased Christchurch and what makes New Zealand a must-visit destination for sports fans everywhere.”

It was kicked off in North Hagley Park with a giant game of backyard cricket with local cricket teams, entertainers and New Zealand cricketing heroes, followed by ceremonial speeches and a huge fireworks display.

Dr Coleman added “the venue has been transformed, lifting its capacity to 18,500 with the installation of temporary seating, hospitality marquees, broadcast towers and additional broadcast facilities.

“The work and preparation that has gone into hosting this tournament has been huge, and last night’s opening ceremony showed we are ready to deliver a world class tournament that provides lasting memories for fans.”