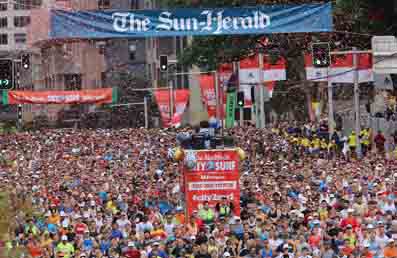 Being internationally recognised for its expertise in communications and public address for sporting events has made 2014 a busy year for The P.A People - providing services to events as diverse as Le Tour de France and Sydney’s City2Surf run.

Now gearing up for the 2015 cricket and tennis seasons, The P.A. People are ready for a summer full of big hits, long rallies and hours at the crease, making sure sports fans at the ground enjoy every moment of the game.

Touring with Monster Jam was a P.A. People communications and audio control system designed to offer simple set-up and hassle-free operation at each show.

The P.A. People Event Communications Manager Travis Henry explains “we had a fully-integrated audio and communications system that was the same in every venue, giving the client a predictable outcome.

“The only thing that changed was the house PA system, which, as it needed to be customised for each venue, was provided locally in each city. It gave the client more flexibility and meant they were able to tour a small amount of gear.”

This pragmatic approach has stemmed from The P.A People’s long experience working on sporting events that range in scope from state football leagues to Olympic Games. 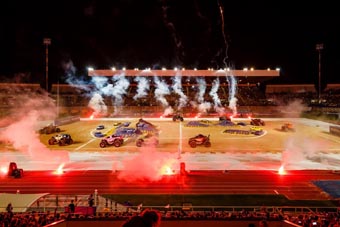 Henry adds “what we did for Monster Jam was not dissimilar to what we did over winter for the football.

“We provide on-stage presentation systems that are fed into the stadium systems.

“In addition, we supply all of the equipment needed for entertainment, ground announcers and communications.

“All of the client’s needs are handled by our staff on the day of the game.”

In an increasingly challenging environment for anyone operating radio microphones and wireless in-ear-monitors, The P.A. People fill a vital role in setting up and operating reliable wireless equipment, being called on to service large events including the NRL and AFL Grand Finals.

As the 1st January 2015 radio frequency spectrum changeover approaches, Henry believes radio frequency management is more important than ever, stating “there’s a lot of crowding in the RF spectrum already.

“The pre-January 1 test sites for the new telco services that operate in our old wireless bands are already operational. The necessity for monitoring and picking clear frequencies is imperative.”

Sydney’s annual City2Surf race in August saw 70,000 participants run the 14 kilometres from the CBD to Bondi. 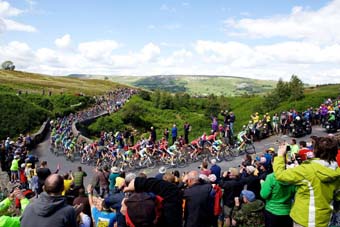 The P.A. People were on hand, providing a PA system that covered the vast areas of both the start and finish lines, and the competing requirements of entertainment, motivation, logistics and health and safety. Over a Dante networked audio backbone, what was effectively eight separate PA systems worked together flawlessly. “

2015 will see The P.A. People starting January by providing communications and PA systems for the AFC Asian Cup 2015, a with 16 countries playing games in Sydney, Canberra and Newcastle between 7th  and 31st January.

Five P.A. People staff will work on each match, providing services and equipment including wired and wireless communications, microphones for performers and announcers, monitoring and fold-back for performers, audio control and additional PA for each game as required.

The P.A. People will also be looking after the Apia International Tennis at the Sydney Olympic Park Tennis Centre, running 11th to 17th January, they’ll be providing PAs for all courts without a permanent system, the player autograph stands and for the big screens outside. In addition, they’ll also be providing audio control equipment for areas with an existing PA, and paging systems for back-of-house.

The P.A. People will also be handling all anthems, presentations, announcements and entertainment for cricket matches played at ANZ Stadium and the Sydney Cricket Ground.