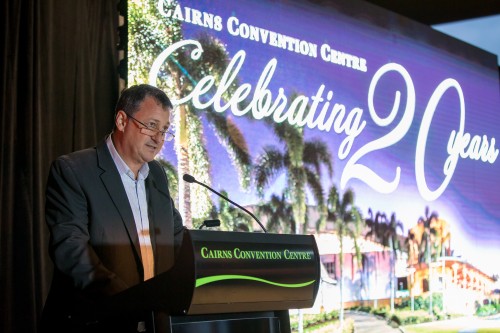 The Cairns Convention Centre has celebrated 20 successful years of operations, with key stakeholders looking back at the many achievements, signature events and accolades that have been attained by the first regional convention centre in Australia.

Commenting on these achievements, Cairns Mayor Bob Manning stated “in the past 20 years, the Cairns Convention Centre has grown in stature and importance to become one of our city’s most vital assets.

“Whether it be sporting and entertainment events, industry expos or international business conferences, the Centre continues to attract large-scale events to our city and is globally recognised as a benchmark performer.”

Praise for the Centre also came from within the business events industry.

Mike Pickford, Executive Director of ASN Events congratulated the team at the Cairns Convention Centre, commenting “we have had the pleasure of working with them many times since opening and they have consistently delivered excellent, responsive and personalised care for our conferences. Nothing has ever been too much trouble, whether for events that have booked out Cairns or smaller ones of only a couple of hundred delegates.”

Events that were highlighted during the celebration included the G20 Finance Ministers and Central Bank Governors Meeting, the Australian Tourism Exchange (ATE held for the first time outside a capital city), Pacific Islands Forum, APEC Senior Offices Meeting, 12th Coral Reef Symposium and the Queensland Sitting of Parliament, which as Ross Steele, General Manager of the Centre explained “would not have come to Cairns without a world class facility like the Cairns Convention Centre.”

The crowning achievement for the Convention Centre’s team over the last 20 years are the 2014 and 2004 AIPC Award for ‘World’s Best Congress Centre’, one of only two convention centres in the world to attain this prestigious client based rating twice.

Steele concluded “we are proud of the part the Cairns Convention Centre plays in Australia’s business events landscape and it was wonderful to have our local community and industry partners share our 20 year celebrations.”