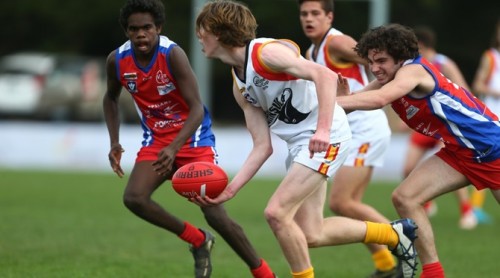 AFL Victoria Chief Executive Steven Reaper said it was pleasing to see the cornerstone of Australian football continue to thrive.

Reaper stated “while season 2016 has seen growth in many aspects of the game, it is pleasing to see club football- the traditional market of Australian Football, continue to grow and be the sport of choice for many Victorians.

“The high number of participants transitioning from NAB AFL Auskick to our Under 8 club competitions strengthens the future of community football in Victoria and promotes lifelong participation in our sport.”

The number of females picking up the football in 2016 continued to rise, with the establishment of 100 new female club teams this year taking it to a total of 355 dedicated female teams providing over 9,000 females the opportunity to play our indigenous sport in a community club setting.

Female youth club team numbers almost doubled this season with a 48% increase in participation of Under 18 girls, while female numbers in NAB AFL Auskick, expanded to 4,621.

Welcoming this growth, Reaper commented “it’s encouraging to see that female football participation rates is continuing to grow across all levels of football in Victoria.

“Our strong female numbers this season has allowed community leagues to establish their own female competitions in 2017, while the introduction of the Swisse VFL women’s competition and the commencement of the inaugural AFL Women’s competition next year is inspiring future generations of female footballers to take up opportunities to get involved in our game.”

Victorians are also enjoying the shorter social form of the game, with more than 4,300 people participating in AFL 9s competitions, while the next crop of future AFL stars continue to bloom in school football competitions, with participation numbers jumping nine% to climb to 118,530.

Reaper added “there are a number of amazing football programs being run at Primary, Secondary and Tertiary levels across the State, all of which require an ongoing contribution from Victoria’s outstanding teachers and more than 2,121 Woolworths AFL School Ambassadors who continue to encourage their students to play our sport.

“In addition we were delighted to see 1,930 kids involved in Access All Abilities programs in schools, which plays an important role in ensuring students with disabilities have the opportunity to be active, build friendships, and experience that feeling of joy that comes with playing Australian Football.”

Reaper said the growth seen across Victoria this season illustrated the success of AFL Victoria’s many programs and initiatives and the tireless work undertaken by community leagues and clubs across the State.

He concluded “to have a total participation rate of more than 410,000 in such a competitive market is a testament to the hard work of our employees around the State and the estimated 78,000 volunteers that drive NAB Auskick, junior and senior football in the community.

“The football opportunities now on offer to participants from all walks of life including our many coaching courses, multicultural and indigenous pathways and umpire programs have resulted in our game becoming more accessible to all parts of the community.

“We will continue to refine the programs we offer and work with the hundreds of fantastic community clubs in Victoria to ensure we keep pace with the changing demands of participants and the communities they represent.”

Figures released by the AFL earlier this year showed that more than 3.2 million Australians participated in Australian rules football in 2015 while Sydney newspaper The Daily Telegraph has reported 250,000 registered participants in AFL and NSW in 2016.