With almost 400,000 participants, $4 million of Queensland Government investment over 18 years, and over 200 billion steps registered, making it the equivalent of 4000 trips around Earth’s equator, CQUniversity considers its 10,000 Steps program to be one of the largest and most successful health promotion programs in Australia.

Now a concept recognised all over the world, the self-monitoring physical activity program encourages participants to take 10,000 steps each day.

Originally developed by researchers at CQUniversity to help raise awareness and increase participation in physical activity by encouraging the participant to accumulate ‘incidental’ movement as part of everyday living, the program’s impact has gone far beyond awareness and participation and was just recently ranked ‘high’ in the Australian Research Council’s (ARC) Impact and Engagement Assessment.

CQUniversity researcher and program leader Professor Corneel Vandelanotte says that since its development in 2001, 10,000 Steps, which is delivered through a website and smartphone app, has directly impacted public health both in Australia and around the world. 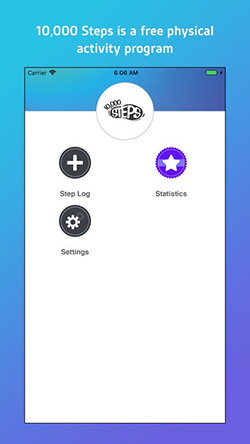 “About half of the Queensland population is not active enough to achieve health benefits and physical inactivity accounts for five per cent of the burden of disease,” Professor Vandelanotte explains.

“Increasing physical activity is therefore an important public health objective as it reduces the risk of developing cardiovascular disease, diabetes, obesity, some cancers and mental ill-health,” he says.

“Through 10,000 Steps we have achieved huge impacts upon societal health and wellbeing with close to 400,000 people and more than 13,500 organisations having participated in the project, logging an average of 39 million steps per day, resulting in increased physical activity.”

Professor Vandelanotte says 10,000 Steps members who participate in the ‘Workplace Challenge’ were found to increase their physical activity levels by an average of 159 minutes per week.

“Over 200,000 members have participated in the ‘Workplace Challenge’, increasing their activity levels enough to meet the Australian National Physical Activity Guidelines and in turn significantly reducing their likelihood of developing cardiovascular disease, type 2 diabetes, some cancer, obesity, osteoporosis, and depression,” Professor Vandelanotte explains.

“In testament to its effectiveness in raising physical activity awareness and delivering positive health outcomes, the program’s annual awareness survey has indicated that more than 70% of Australians are aware of the 10,000 Steps program, compared to less than 10% for most other health programs.”

Minister for Health and Ambulance Services Steven Miles said it was great to see more Queenslanders getting active through the 10,000 steps program.

“In Queensland, nearly half of adults and children aren’t getting enough physical activity, which is why the Palaszczuk Government is funding programs like these,” he said.

“We want families to create healthy habits together, building different forms of exercise into their daily lives, and the 10,000 steps program does just that.

“I’m thrilled to see our investment is helping Queenslanders boost their physical activity levels, and ultimately, improve their health and wellbeing.”

Professor Vandelanotte says 10,000 Steps would not have gained the momentum that it has if it weren’t for the long-term and ongoing support of the Queensland Government investing $4 million into the program since its development in 2001.

“10,000 Steps has been the Queensland Government’s key physical activity workplace health promotion strategy since 2001 and is included in the Australian Department of Health’s Obesity Prevention Programs resource material,” he said.

“It has also been disseminated through 13,500 organisations across Australia including workplaces, health providers, community groups, schools and local councils as a direct result of the funding support.”