$1 million boost for regional arts and cultural activities in Wellington 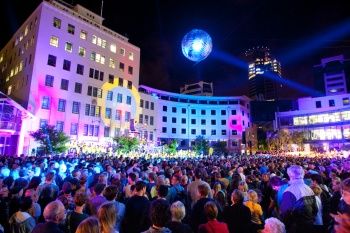 Open air events at the New Zealand Festival will be free to the public for three weeks in February and March next year thanks to funding support from the Wellington Regional Amenities Fund.

Chair of the fund, Wellington Mayor Celia Wade-Brown, says the New Zealand Festival has played an important role in bringing high quality events to Wellington and building the city’s reputation as the arts capital of New Zealand.

Mayors from six local councils which contribute to the amenities fund considered 23 projects across a wide cross-section of arts, cultural and environmental activities

10 projects were selected for funding of more than $1 million ranging from the Aratoi Museum of Art and History in Masterton through to the Circa Theatre construction programme, the highly popular LUX Festival, Orchestra Wellington, and the New Zealand Festival which received the largest single grant.

Mayor Wade-Brown stated “we set out to use the money to develop and sustain regionally significant entities for the benefit of local residents and visitors.”

The Wairarapa’s Museum of Art and History, Aratoi in Masterton, received funds to support its 2016 exhibitions and programmes. Plans to upgrade Kapiti Coast’s Mahara Gallery exhibition space to house and display a nationally significant collection of 24 works by Frances Hodgkins, held in the collection of the Field family, were also supported.

The Wellington Zoo and Zealandia’s Nature Connections programme that works with 10 conservation and environmental attractions around the region including Pukaha Mt Bruce, Staglands and Nga Manu, received a grant. So did the popular Matariki Festival that takes place at galleries and museums across Wellington each year.

Funding has also been provided for a Wellington Museums Trust programme to subsidise travel for lower-decile schools to visit the Capital which Mayor Wade-Brown says is important to ensure children across the region can visit Capital city institutions like Te Papa, Parliament and Archives NZ where the Treaty of Waitangi is held. She says Wellington city is an education destination for New Zealand schools.

Projects funded by the committee include: